This research includes theoretical solutions, measurements, and numerical simulations of the flow in the models of the blade cascades equipped with different variants of Tie-Boss coupling. Data measured on the cascades equipped with Tie-Boss are compared with the data measured for clean cascade. Further analysis leads to optimisation of the shape of Tie-Boss to obtain lower total pressure and kinetic energy losses, which enhances the overall efficiency of a steam turbine. 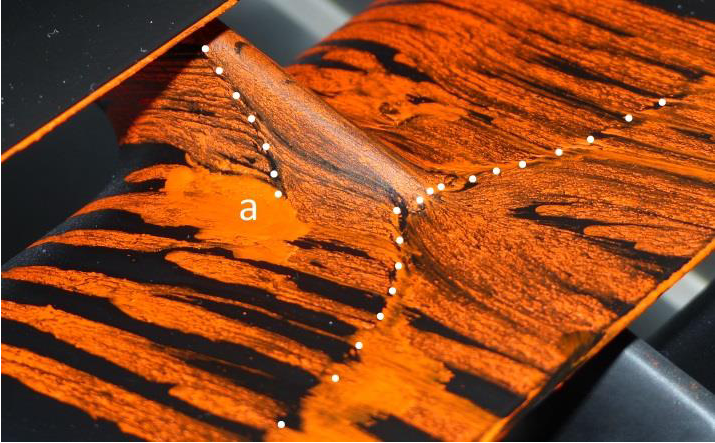 The flow through interblade channels in the vicinity of the turbine rotor hub or rotor casing is affected by the boundary layer, which is formed over these surfaces. As such boundary layer passes the interblade channel; a number of vortex structures are formed, considerably affecting aerodynamic performance of the interblade channels. A complexity of this problem require a use of all means of aerodynamic research e.g., theoretical solutions, experiments, and numerical simulations. From the obtained data and its analysis, various vortex structures can be identified together with its origin, evolution, extent, and influence on the aerodynamic performance of the particular test article. Thank to better understanding of the near-wall flow structures, the final aerodynamic design of the turbine blades can be modified to minimize adverse effects of such structures. Then, the ultimate outcome is a better overall efficiency of the turbine.

Figure 2 shows two sections through the exit flow field of the turbine blade cascade. One of them was obtained for supersonic exit velocity while the other one for subsonic. In the resulting flow fields, the vortices originating in the vicinity of the test section side walls and the associated energy losses are well observable. Experimental research on the compressible fluid flow through axial compressors is important but very complex problem of internal aerodynamics. Experiments are complicated because the air in wind tunnel is forced to flow from the location of the lower pressure to the location of the higher pressure. Additionally, to make the transfer of the model research data to a real machine possible, numerous conditions must be fulfilled. This requires complicated regulation of the pressure at the outlet and in many cases also the boundary layer suction from the test section side-walls and from the walls of the interblade channels to prevent large flow separation, which would spoil the measured data.

Figure 3 shows an interferogram of the portion of the flow field between the transonic compressor profiles. The compression of the gas (air) in this case occurs mostly at the normal shock wave visible in the left side of the picture.
This research is conducted in cooperation with Doosan Heavy Industry & Construction Ltd., Soul, South Korea, and is also supported by Technological Agency of the Czech Republic. Apart from turbine and compressor blade cascade flow research, the experiments on the flow in various assemblies of regulation and fast acting control valves, which are essential components in most of the power producing machines, are carried out in our lab. Our research in this field has an impact on the efficiency of the power producing machines, their service life, reliability, and cost. Along with the measurements of losses and mass flow rates, the investigation of the flow instabilities, which are common in such assemblies and present serious risk for safe operation.

Figure 4 shows the model of one of the complex valve assemblies measured for Doosan Škoda Power, Ltd. company, Pilsen, Czech Republic. Recording V1 shows a visualisation of the surface streamlines of the longitudinal twisted vortex in the piping downstream the valve chamber of the valve from Figure 4. Our unique experimental facility allows to measure also transonic and supersonic flow fields between thin low-cambered tip section profiles of the long rotor turbine blades. One of the research projects was devoted to investigation of supersonic flow in flat plate profiles cascade. Since these profiles are intended for use in the last stage blades of the steam turbine, they are exposed to water erosion as the steam is partially condensing in this location. For this reason, these blades get worn after some time of operation. Therefore, it is necessary to protect the leading edge of these blades using anti-erosion protection. We are involved in the project aimed to aerodynamically optimize the shape of such protection (stellite alloy cladding) and to investigate the influence of erosion on the aerodynamic performance of these profiles.

On the colour schlieren image in Figure 5, we can observe the influence of the stellite alloy cladding of the profile leading edge on the supersonic flow field in the interblade channel. Letter (A) marks the shock wave, which is generated on the interface of the cladding and the original profile surface. Through appropriate shaping, the flow separation, negatively affecting energy losses and forces acting on the airfoil, can be prevented. 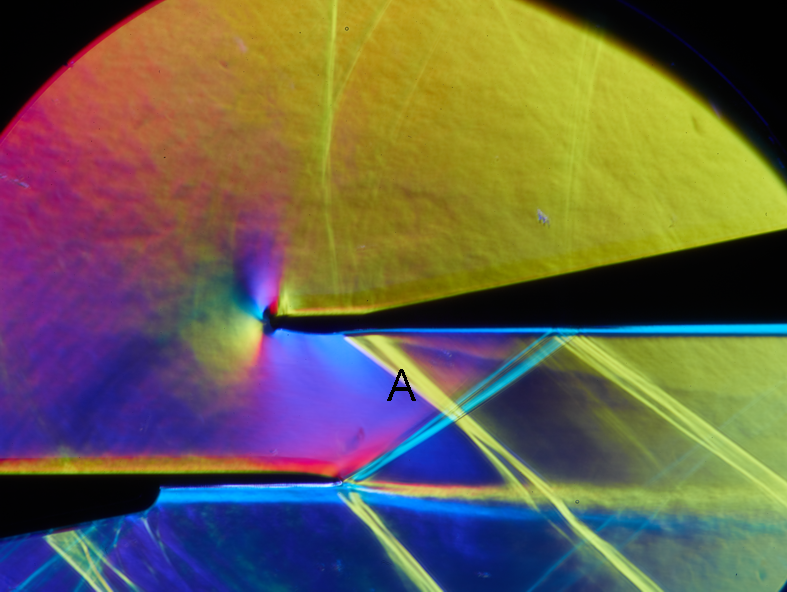 The turbulence transition in pipe and channel flow represents up to now an important topic, since it is the nature of the flow, which substantially affects the friction and associated losses. With increasing miniaturization and more detailed numerical simulations of the various small flow parts of the turbomachines, the need for experimental data to explore the physical phenomena of the narrow channel flow and to validate numerical codes is still present.

The flow in narrow channels of the rectangular cross-section of the high aspect ratio is investigated in our laboratory using the experiments and numerical simulations. Experimental investigation is carried out using various independent methods including optical and pneumatic measurements and hot-film anemometry. The topics of investigation include the influence of the oriented surface roughness on the flow development and the wall shear stress and investigation of the phenomena of the aerodynamic choking due to friction.

Figure 6 pictures the comparison of the computed lines of constant density (upper half) with the measured interference fringes (also lines of constant density) in the exit region of the narrow channel during the air expansion to very low pressure. Despite the apparent similarity of the measured and computed flow fields, the values of the wall shear stress measured using the hot-film probe significantly differs in some of the measured regimes from those computed using the commercial CFD code. Therefore, to correctly predict the wall shear stress, the numerical model need to be modified for this specific purpose and validated.

A unique apparatus used for flow field visualisation of compressible fluids. Obtained images depicting fields of interference fringes can be evaluated to obtain, for instance, pressure distribution over the tested profile. The apparatus used in our lab was manufactured by Novotechnik company in Stuttgart and in our lab has been used since 1965. It has a unique large field of view of approximately 160 mm in diameter. Air flow properties including its kinetic energy can be determined using pneumatic probe measurements. The most common probe used in our lab is the five-hole conical probe, which is capable to measure the static pressure, total pressure, and flow direction. From these properties together with the flow parameters at the inlet to the measurement section, one can determine the loss of kinetic energy due to irreversible processes occurring during the flow past a tested article. The pneumatic probe is a part of traversing device, which enables the automatic positioning of the probe in examined flow field. It allows translation in two axes and rotation in the plane of the flow. The rotation to flow direction can be carried out real-time using a PID regulator.

Figure 8 shows a 3D model of the traversing device with the conical five-hole pneumatic probe. 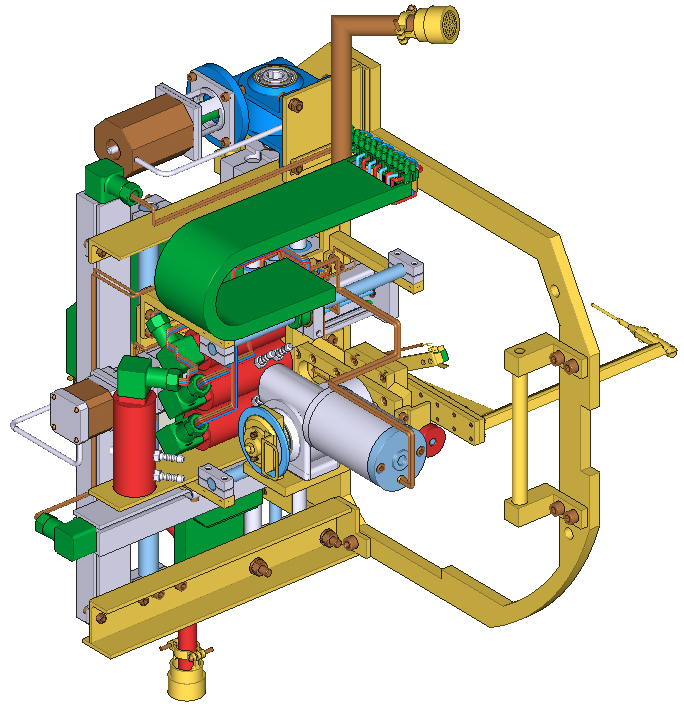 Pressure distribution over the surfaces of the articles being tested can be examined using the pressure sensitive paints. These paints fluoresce under the UV light in differing intensities depending on the surrounding oxygen concentration. Temperature sensitive paints are capable to locate transition to turbulence since the turbulent flow exhibits higher wall shear stress (more intensive mixing), therefore, higher heat exchange. Both mentioned methods are limited by the necessity of the optical access to light the examined surface and at the same time capture the images with a high-speed camera. Our laboratory is equipped with the state of the art facility, which is promising for overcoming of the mentioned drawback.

Figure 9 pictures the pressure distribution over a wedge in the supersonic flow. These results were obtained in NASA LRC. 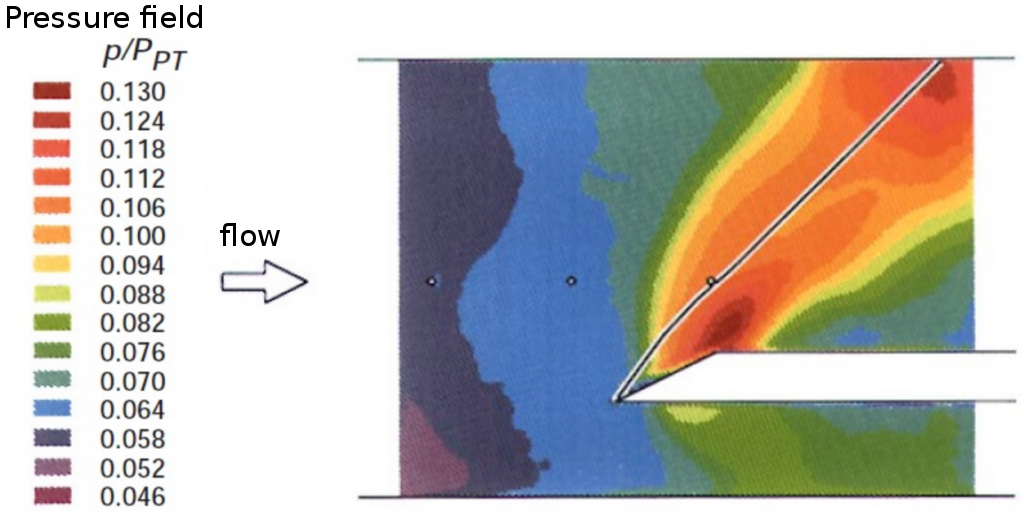 is a method for boundary layer investigation, which is based upon the similarity between the velocity profile in the vicinity of a body submerged in the flow and the temperature profile generated by a heated element located at the surface of the body. Hot-film probes are usually available in two variants. The first one is the probe with one hot-film sensor, such as Dantec 55R45. This probe is intended for repeated use and the calibration to obtain the wall shear stress is possible. The second version is an array of hot films deposited using an electron beam on a thin adhesive foil. Despite that such design is suitable rather for qualitative measurements, the data obtained using the array of hot films might provide valuable data on the location of the laminar-turbulent transition.

Figure 10 shows the hot-film array at the suction side of the profile being examined, which is intended for the tip section of the long blade of the high output steam turbine. Measured data can provide information about the boundary layer character and laminar-turbulent transition. 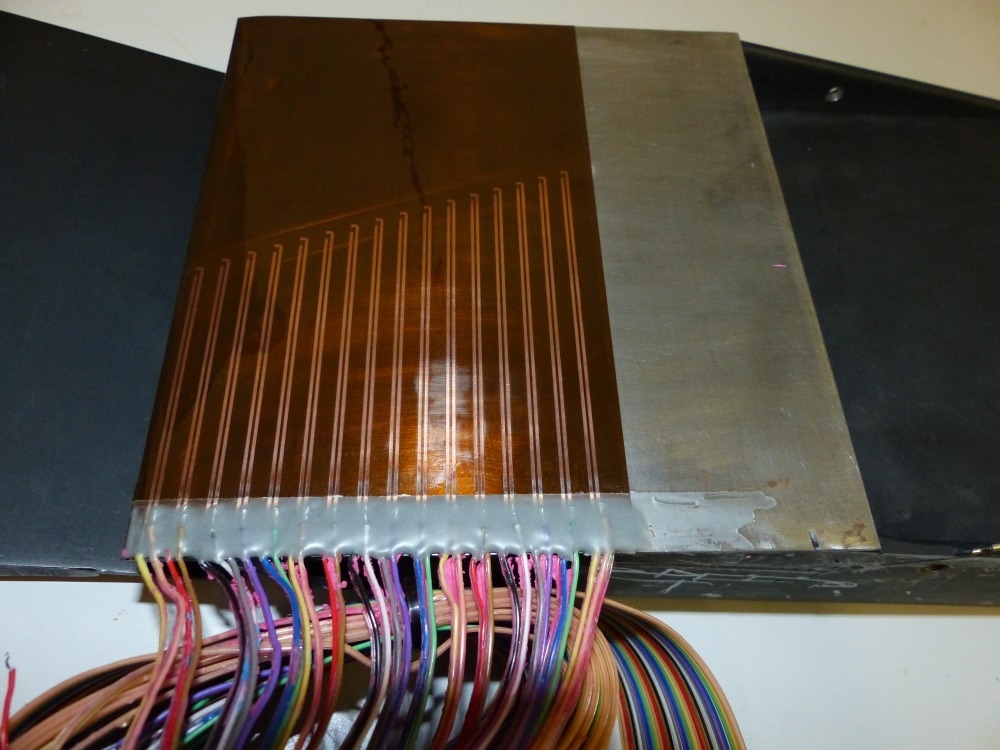 Figure 11 shows the nozzle outlet of the calibration facility with a five-hole conical probe being calibrated. Ongoing topics:
Force effects and irreversible phenomena during the flow past the model of the middle section of the large output steam turbine rotor blade equipped with Tie-Boss damping device (Tomáš Radnic)