The field laboratory in Nový Knín houses laboratories of three different departments of the Institute of Thermomechanics:

The Institute of Thermomechanics of the Academy of Sciences of the Czech Republic was founded in 1953 – first as the Laboratory of Mechanical Engineering – and from the very beginning it has been oriented towards fundamental research in power engineering. Later, in 1962, this was codified by the decision of the Presidium of the Academy of Sciences, according to which the Institute´s main activities had to consist of fluid dynamics and heat transfer at high temperatures and high velocities, in gas dynamics of turbomachinery, and in thermophysical properties of gases. 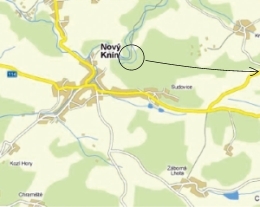 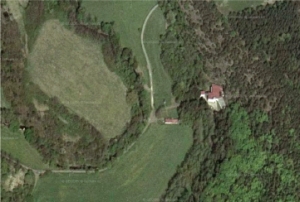 In 1962, only one high speed wind tunnel was operational in the Institute of Thermomechanics. It was an induction type wind tunnel built in 1959 for investigating 2D cascades. This wind tunnel could hardly cover the increased demands on the high speed research in internal aerodynamics in this country, and thus a decision was made to build a new facility for research into high speed aerodynamics.

The new facility had to serve a double purpose, i.e., the routine experimental investigation of transonic and supersonic turbine and compressor cascades, and, in particular, fundamental experimental research in transonic internal flows. From a detailed literature survey the concept of a new laboratory optimised from the economic, maintenance and operational points of view had emerged – the new wind tunnels were to be of the intermittent type, breathing atmospheric air expanding into a large vacuum storage.The required Mach number at cascade inlet or outlet had to be about 2, the minimum running time from 10 to 50 seconds, and the test section area about 160 x 400 mm. Thus ‚ the required mass flow amounted to about 20 kg per second, and the minimum volume of the vacuum storage to about 6000 m3. Inspired by some foreign designs, it was decided to look for a natural underground space, such as, e.g., mines, caves, etc. From about fifty places near Prague which satisfied these requirements the final choice was two almost parallel horizontal galleries of the former gold mines near the town of Nový Knín. 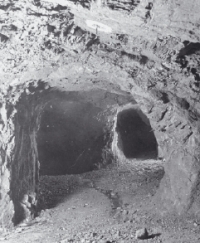 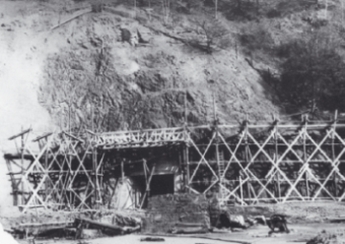 Fig. 2: The gallery entrance Earthwork on the mouldered rock and concreting of the gallery portal.

Each gallery is about 1 km long. They were connected by digging out a connecting tunnel to provide an underground space with a total volume of 6300 m3 . The 65 meters of overlying, unweathered, compact crystalline schist makes the space leaktight. The outer layers of the mouldered rock were removed and the galleries were sealed by steel partitions embedded into the rock, and reinforced by a thick concrete layer.

The project documentation was completed in 1963 in two places – the laboratory building was designed by the Regional Design Office in Prague 7 following the specifications from the Institute of Thermomechanics, while all the technological equipment, as well as the transonic wind tunnel for 2D cascades was designed in the Institute of Thermomechanics itself. During the following years the Laboratory was extended and more facilities for research in transonic internal flows were added. The whole Laboratory was put into operation in 1965 [2].

In 1994 the Laboratory had to be extended to house a newly built wind tunnel for modelling flows in the atmospheric boundary layer. The Laboratory was rebuilt in its present form in 2004. In the same year a new extension was completed, and a considerable reconstruction of the whole technological equipment took place. After forty years of trouble-free operation the water-ring-vacuum pumps were replaced by new ones, the water supply was made independant by a closed cycle, and a new modular wind tunnel was built.

Research in the Gas Dynamics Division has been carried out along two lines:

Fundamental research was concerned with a detailed study of development and structure of phenomena characteristic of transonic and supersonic flow in 2D axial, as well as radial cascades. The problem of starting a supersonic cascade was studied in detail. For the first time we have shown how the system of front shock waves in a supersonic cascade develops [12], and how it affects the flow structure in the cascade. Experiments were carried out on a cascade of double-circular-arc symmetric profiles, and the results have become a standard for validation of CFD methods developed in our Institute, as well as in institutes abroad (Fig. 3). These measurements were also confirmed by a high-speed camera, by recording interferogrammes of the whole process of starting supersonic flow in a cascade.

Fig. 3: Development of a set of front and closing shock waves in a blade cascade. 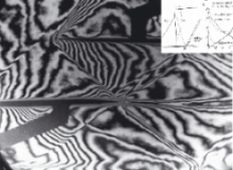 Fig. 5: Analysis of propagation and reflection of characteristics in local supersonic region.

At the beginning of the seventies, the problem of aerodynamic optimization of turbomachinery cascades was one of the main topics investigated theoretically and experimentally by the Gas Dynamics Group [13]. It also included a detailed study of the origin and development of shock waves in the leading edge region, and in the trailing edge region, as well as interaction of the shock waves with boundary layers, other shock waves and simple waves, incl., e.g., attenuation of shock waves by expansion regions [15]. The results obtained were used in optimizing the tip sections of the turbine cascades for the last stages of large steam turbines for nuclear power plants. Reshaping the leading edge of the 1077mm long blade (ŠKODA turbines of 500 MW and 1000 MW output) decreased the losses in the design point , i.e., at M2is ~ 1.8 , by almost 30% [15].

Since the cascade wind tunnel was made operational 40 years ago, almost 100 various turbine and compressor cascades have been tested in detail. New and original results have been obtained, contributing substantially to our knowledge of transonic and supersonic flow in cascades. At the same time new measurement methods and technique for transonic cascade testing were developed. The Laboratory has become one of the few laboratories in the world capable of testing cascades at M1 ~ 1.

The extensive experimental programme covered a detailed and systematic investigation of numerous turbine rotor cascades in the range 0.3 < M1 < 0.9, M2is ~ up to 1.95 . Only the investigation of the last stage of the 1000 MW steam turbine represents about 1000 of evaluated optical measurements. Recently, a considerable part of the archive of interferogrammes and schlieren pictures was digitalized e.g. [16], and is now available in the Institute in electronic form.

The turbine rotor cascades were tested also at extreme incidences (e.g. Fig. 6). It has been observed that the displacement effect of the leading edge separation bubble on the blade pressure side can change the effective shape of the blade so that the pressure is lower there than on the other side of the blade, thus changing the direction of the resulting aerodynamic force (Figs. 6, 7). 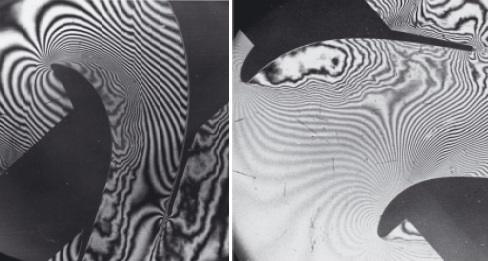 Fig. 6: Interferograms of a turbine cascade at extreme incidence angles. 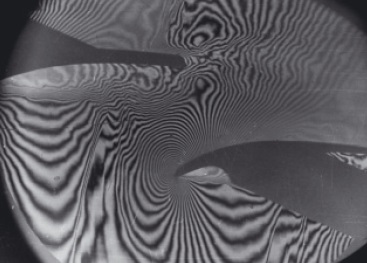 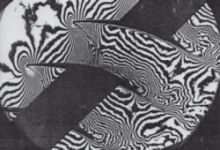 For the first time ever, a detailed experimental investigation of transonic flow in radial-inflow-turbine cascades has been carried out (Fig. 9). As the blades are of very low aspect ratio, it has been necessary to take all the threedimensional effects into account. To make this research possible it has been necessary to revise the method of testing and evaluating the aerodynamic characteristics of the cascades, and to adapt the test section to make also the optical measurements possible [19]. 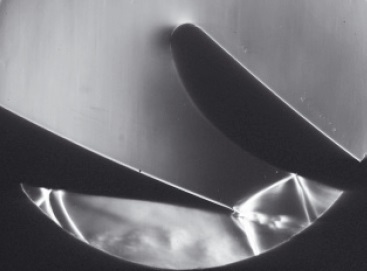 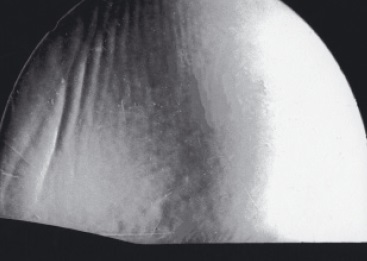 The long term research programme comprises also systematic investigation of transonic and supersonic flow in the so called relatively narrow channels, as, e.g., diffusers of centrifugal compressors, or radial turbine cascades. This flow is inherently threedimensional, affected by aerodynamic choking, and by all viscous flow effects, like threedimensional flow separation, secondary flows, strong viscous-inviscid interaction, etc. e.g. [20], [21], [22], [23], [24]. One of the important problems solved was the transition from supersonic to subsonic velocities in these channels, which often takes place in a train of shock waves, the so called pseudoshock wave. Its origin and development was experimentally investigated e.g. [25], [26]. Fig. 10 shows a closure of a local supersonic region in a narrow channel, where the terminal shock wave is substituted by a pseudoshock wave.

Since 1960, the Gas Dynamics Group has been engaged in theoretical and experimental investigation of unsteady transonic flows e.g. [27], [28], and in the origin and implications of transonic instability. The experimental investigation was carried out in the Aerodynamics Laboratory in Nový Knín e.g. [29], [30], [31]. The wind tunnel for cascade research was adjusted for measurements of symmetric transonic flow past isolated airfoils (NACA0012, and a symmetric double-circular-arc profile with 18% relative thickness), and for studying gradual growth of the terminal shock wave and its stability against disturbances generated in the wake. The shock wave movement was traced in a streamwise-oriented slit above the airfoil by a fast streak camera [29]. The upstream propagation of disturbances, or propagation of disturbances around the airfoil in the subsonic part of the boundary layer, were also studied e.g., [31], together with means of preventing this movement (e.g., by splitter plates on leading or trailing edges) and its implications on the flow stability.

Further to the investigation of flow past blunt trailing edges [32] extensive experimental research of the flow past plugs of large regulating valves for ŠKODA power plants was also carried out. This research threw light on the sources of unsteady flow phenomena in relation to the plug shapes (Fig. 11), and thanks to the elastic support of the plugs it was possible to measure even the excitation forces at transonic flows in the valves [33]. 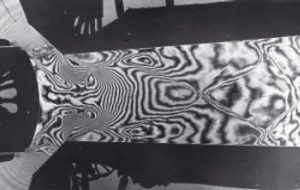 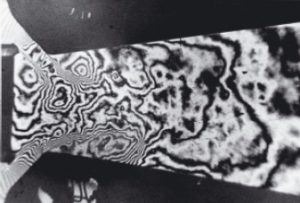 Fig. 11: Interferograms of flow in a regulating valve.

Some fundamental studies were devoted to the flow in the close vicinity of the critical cross section. In nozzles and channels it is especially the sonic line shape which has a great effect on development of transonic and supersonic flow in the divergent part of the channel. It has been proved experimentally that while approaching the critical cross section, the velocity profile becomes more uniform and the boundary layer displacement thickness considerably decreases [26] (Fig.12).

Fig. 12: Interferogram of flow in vicinity of critical point.

Several other problems of fundamental character were also investigated experimentally. A test section (Fig. 13a) with a special model mounting with two degrees of freedom (by a vibrating profile it was rotation and displacement perpendicular to the main stream direction) was built in which the quantitative optical measurements (interferometry) can be made for any predetermined phase of the movement (Figs. 13b,c). 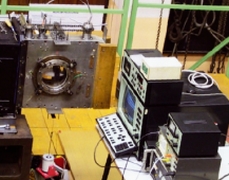 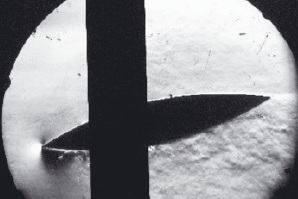 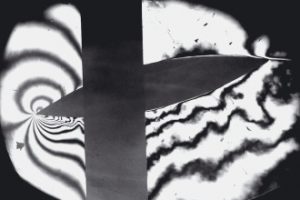