Laboratory of Vibrodiagnostics and Nonlinear Dynamics

In the grant project GACR No: 16-04546S, the FSI research group focused mainly on flow-induced vibration in periodic bodies; e.g. steam turbine, particularly blade flutter. The research was carried out by numerical modeling and the experimental analysis. For numerical modeling a reduced-order aeroelastic model (ROAM) tool is developed for fast analysis of classical flutter. A mesh-free fluid solver is developed for fast estimation of unsteady aerodynamics loading and to estimate the aerodynamic damping in 2D and 3D blade cascades. The damping is estimated with the traveling wave mode (TWM) method. The unsteady incompressible flow field is modeled using the panel method based on the boundary element method. The structural part is modeled with a non-linear beam element based on an FEM solver. Both solvers are coupled to perform aeroelastic simulations. The results were validated with experiments on the turbine blade cascade. The proposed methodology estimates aerodynamic damping with acceptable accuracy for the aeroelastic analysis of the cascade. Moreover, present ROAM shows significant reduction in computational time.

The test cascade with 5 flat plates has been designed for experimental study of FSI problems. The 2 boundary plates were steady and the 3 middle plates were periodically excited by electrodynamic exciters with prescribed amplitude, frequency and phase. An algorithm for harmonic excitation with a phase shift of the plates in the cascade was developed in SIMULINK program for the control system dSPACE. The aeroelastic behaviour of the cascade was studied in collaboration with the department D1 in a wind tunnel at different Reynolds numbers. PIV optical method was used for the flow velocity field analysis. The aeroelastic coupling was the most dominant at forward wave propagation, but the most destabilizing effect of the coupling was detected at backward wave propagation due to phase lag of the relative velocity motion and aerodynamic forces with respect to the motion of the reference (middle) blade. The experimental data were valuable for validation of the in-house-developed numerical aeroelastic codes. 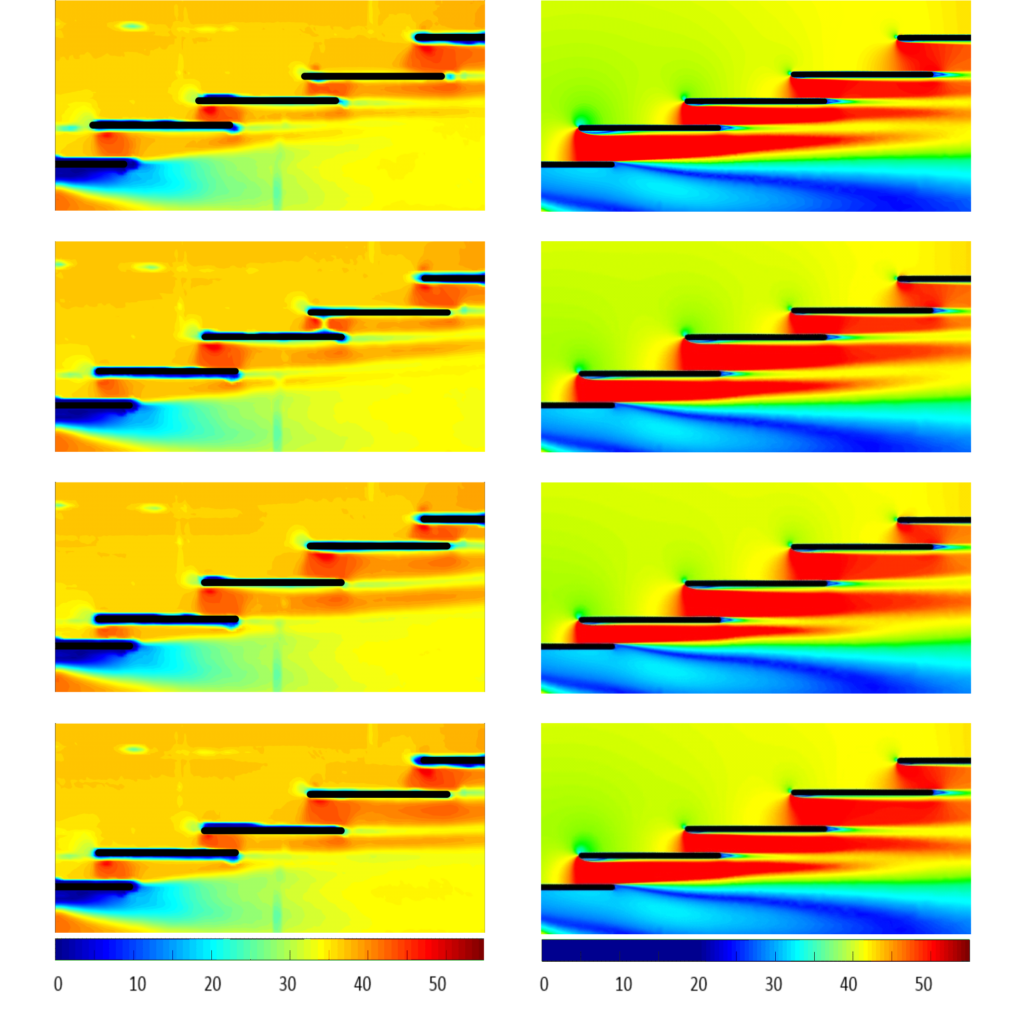 For determination of critical and post-critical behaviour of self-excited vibration in the blade cascade, the Van der Pol model was proposed. The advantage of this theoretical model is the conversion of negative damping into positive once the amplitude of self-excited oscillations exceeds prescribed limits. Therefore, to study the interaction of forced and self-excited vibration of blade cascade under flutter, we proposed two types of Van der Pol aerodynamic self-excitations. As case studies the different blade systems (bundles, whole wheels) with viscous-elastic or dry-friction damping in the blades shroud, delayed harmonic force excitation and the Van der Pol aerodynamic self-excitation were analyzed. This research focused on the evaluation of the post-critical dynamic properties of the rotational periodical structures and self-excited vibration suppression by different types of structural damping. 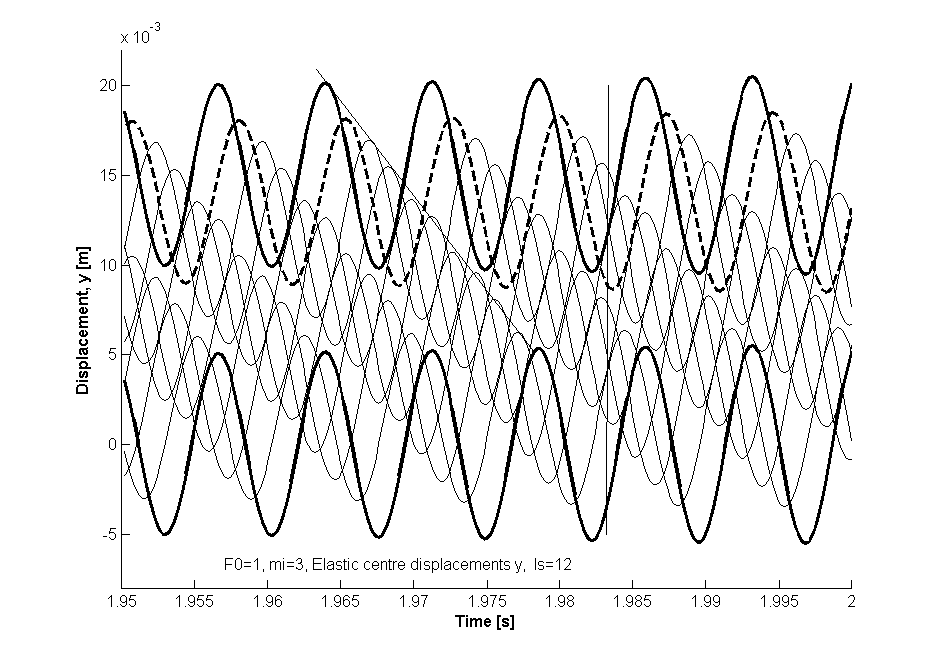 Computational modelling of turbine blades and bladed disks with inter-blade dry-friction damping was studied. Friction effects in blade couplings can be used as a source of passive damping. To describe the nonlinear influence of friction couplings on dynamic behaviour of blades, tie-boss couplings was chosen. To show temporal and spatial variability of contact states during one period of oscillation, the 3D FE models with surface-to-surface contact by the Augmented Lagrangian method were studied. Solving a full FE model with a large number of nonlinear coupling conditions in discretized contact surfaces is computationally demanding and part of computations was ascertained by HPCs (IT4Innovation Centre). Therefore the dynamics of a bladed disc with tie-boss couplings was also solved by semi-analytical models; i.e., having a reduced number of DOFs, contact “surface to surface” simplified to one-point contact that moves on the contact surface. Non-linear effect of friction couplings on the dynamic behaviour of the system was studied at different excitation amplitudes. For validation of the models an extensive experimental research of bladed systems with dry-friction coupling was performed. The physical models of blade bundles and blade wheel model were designed, fabricated, equipped by sensors and dynamically tested. 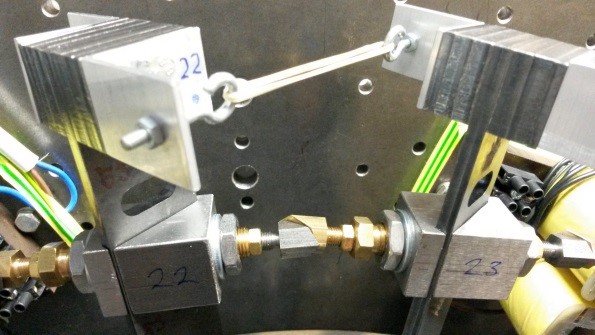 Figure 5: Set-up views: a) the bladed wheel with tie-boss interconnections; b) tie-boss view (Detail B) with pre-stress strings. 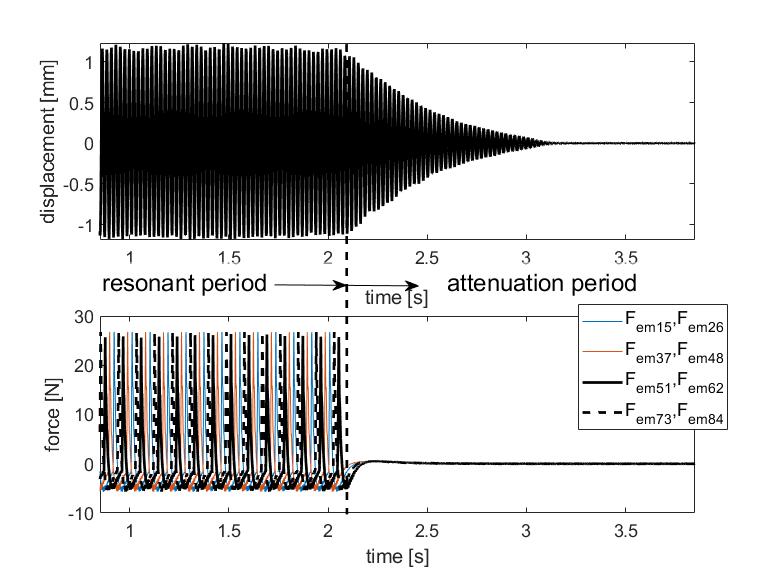 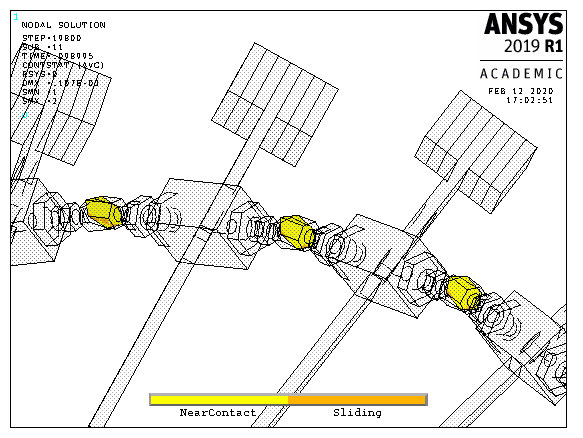 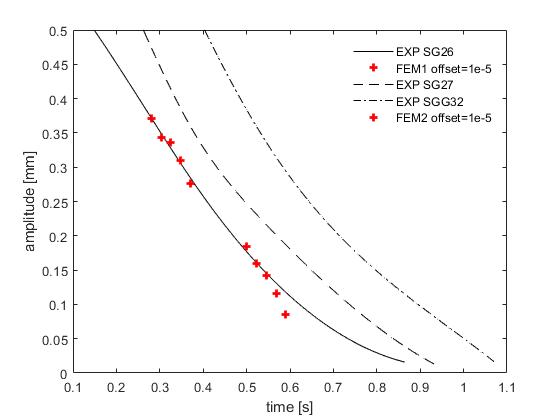 The research on dry friction vibration damping of turbine bladed cascades was published in the chapter of the Springer book. The main emphasis herein was the solution of damping effects of dry friction contacts in tie-bosses and shrouds. Friction is modeled herein from phenomenological view. The numerical models (i.e. discrete analytical, reduced and FE) used in our research of non-linear dynamic behaviour of the blade cascades and bladed wheel are discussed. Dynamics states, such as resonant vibration or free attenuation are considered. The detail dynamic analysis of non-linear behaviour of these systems due to dry-friction contacts is presented for discrete analytical model with the stick-slip friction contact. Travelling wave vibration mode, the dynamic responses of the wheel to nozzle excitation and self-excitation are studied. 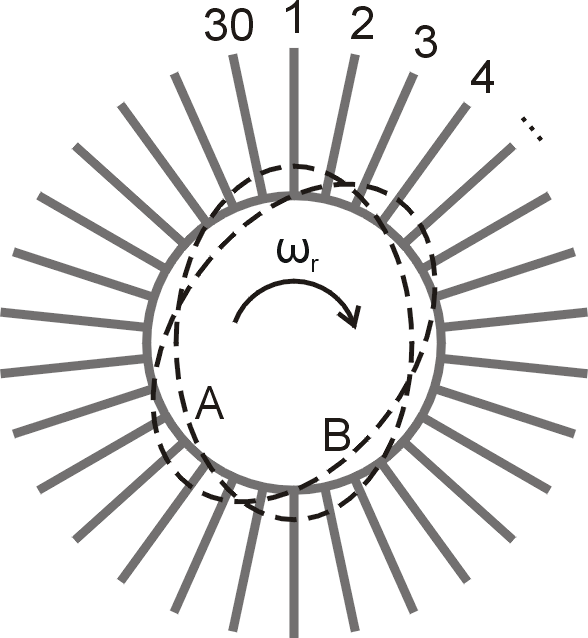 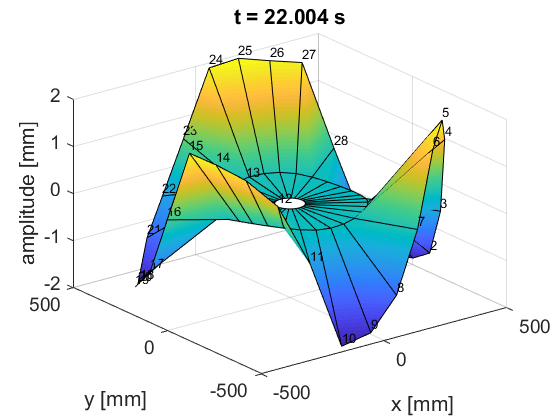 Figure 9: Schema of analytical model of bladed wheel with 30 blades and 2ND vibration modes A and B (dashed lines) (I), example of self-excited vibration shape of the wheel with friction couplings (II). The flowing gas in turbines can cause, in addition to the periodic wakes exciting forces, also instability and an increase in self-excited oscillations of the bladed wheels. The mode of self-excited vibration for certain setting of excitation intensity and frictional forces is shown in (II) for model case of the wheel (I).

The boundary element (BE) based panel method (PM) is used to model flow field around bodies. Since we deal with the problem of the dominant resonant vibration of the blades and bladed disks, modal reduction method was used, and the modal properties of the system are accurately preserved. In addition, the numerical modal model can be validated directly by experimental modal analysis. The Loose coupling method is used to solve the coupled fluid-structure multiphasic problems. Flow and structural equation are solved independently and they exchange data in pre-set time steps in time marching FSI simulations. 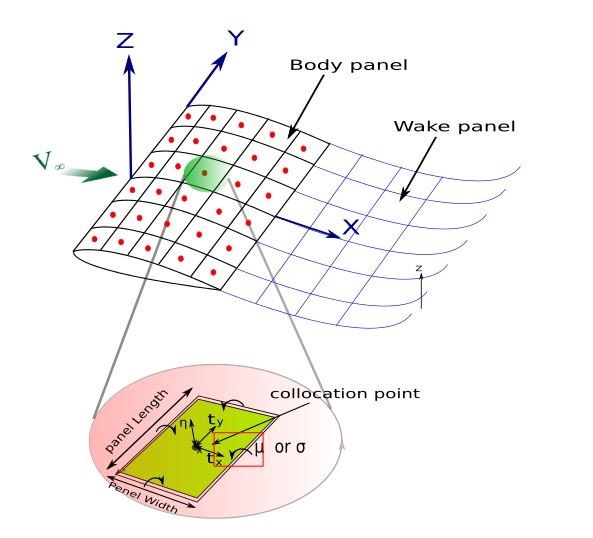 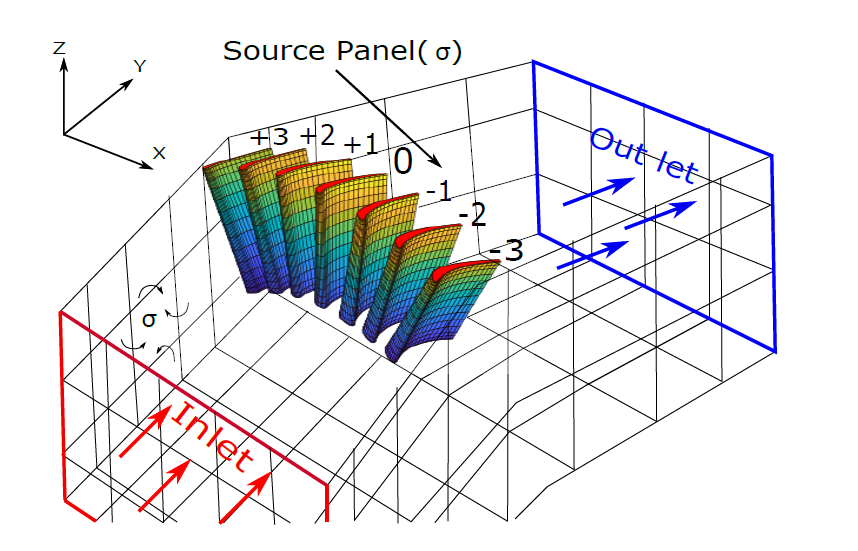 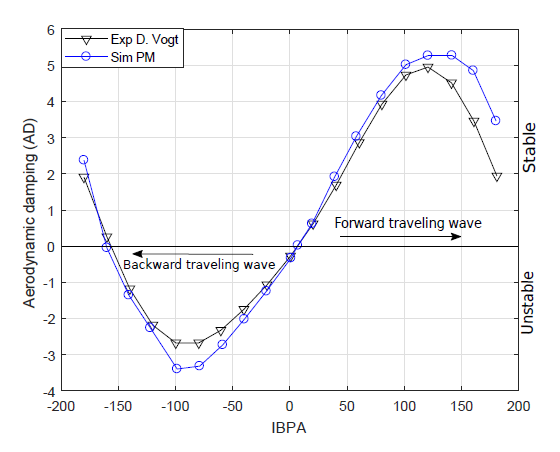 Figure 11: BEM based numerical model of the 1st test case (a) and the AD vs. IBPA comparison with experimental result (b)

The FSI research group has started to participate in applied research dealing with the flutter problem in turbomachinery. A reduced order flow solver and an aeroelastic solver will be developed for this purpose.

TACR no. TA04011656 Research and development of new type of high-speed planetary gear unit with the "flexible pin" technology to support the planet wheels enabling the transmission of high outputs (in collaboration with department D2)

Numerical dynamical models of planetary gearbox with four satellites and standing planet carrier were developed. The strongly non-linear model of with four satellites on the flexible pins was developed in MATLAB/Simulink. Due to internal dynamic loads and external forces and moments acting on the gear box, the contacts between the teeth mesh profiles can break during dynamic deformations. This can cause impact effects in the toothing, which can cause further dynamic loading of the whole system. This effect was analyzed for various design parameters. For calculations of spectral properties of the four-planet Wikov gearbox, a linear gearbox model with four satellites and standing planet carrier was developed.

Experimental analysis of elastic pins of four-planet gearbox with flexible pins designed and manufactured by Wikov Gear was performed. Measurement was carried out at a test facility at Wikov Gear. With the use of standard bearings of the planets, maximum speeds of 8500 rpm and with the floating ring bearings a speed of 14500 rpm were achieved. The methodology of measurement was proposed. The analysis was focused on evaluation of significant resonances of oscillation of planet pins for attuning parameters and validation of the numerical models.

The high-speed light nonlinear parametric systems with minimum dimensions and masses are very sensitive to their parameters. Therefore, theoretical research of the dynamic analysis of gear planetary systems plays a significant role in their development. The analytical solution leads to complicated systems of integro-differential equations or to complicated simulation models in MATLAB/Simulink. Therefore, the transfer branch of split power flow of planetary system with six degrees of freedom was studied and the bifurcation resonance characteristics and formation of ambiguity of characteristics of relative motions in gear meshes were analyzed. 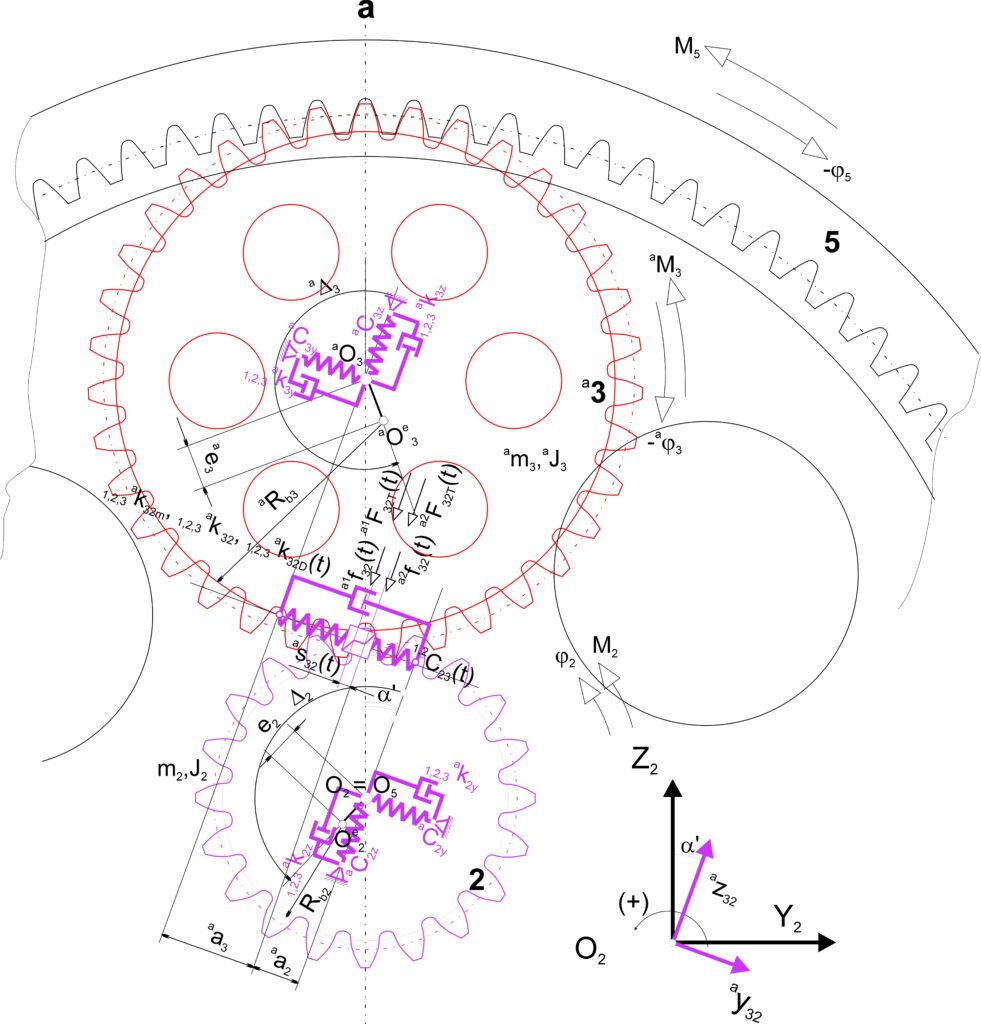 Fig. 12a: The mathematical model of kinematic pair of gears. 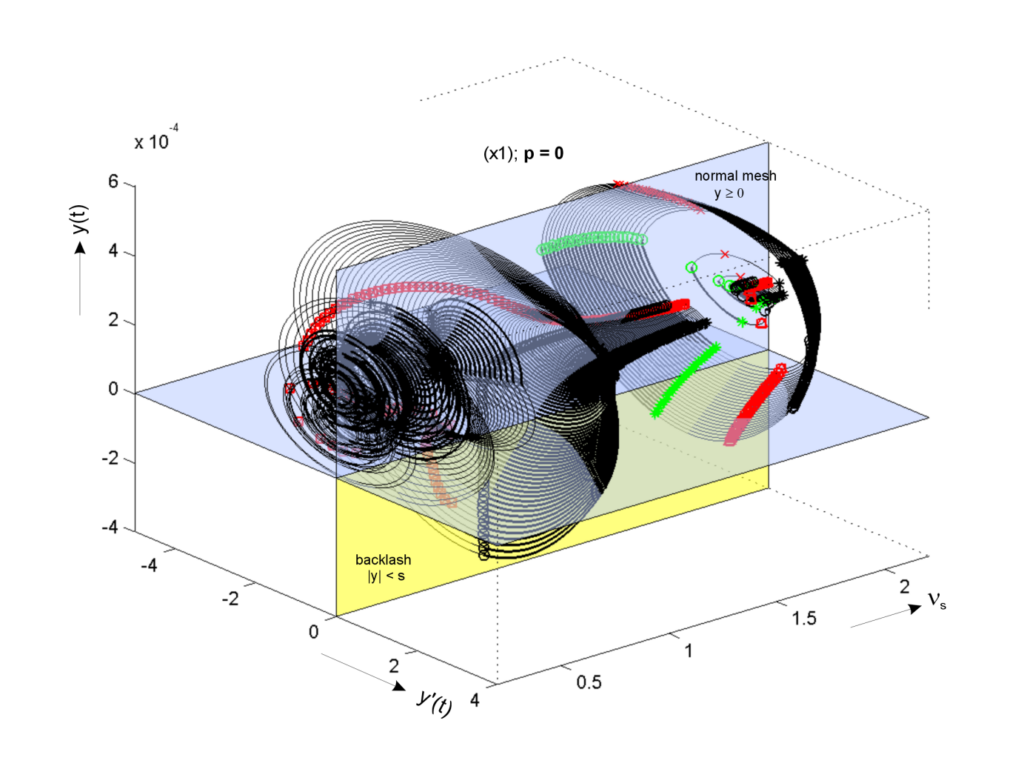 The project is aimed at implementation of smart and innovative damping technologies into the railway wheels: I) new compounds are to be proposed for production of damping rubber segments that are more highly resistant to fatigue and environmental influences for rubber-damped railway wheels

I) Rubber-like materials with different elastic, damping and thermomechanical properties are used as resilient elements both machines and railway wheels in praxis.. For hard rubbers (Shore >50), unlike conventional materials under dynamic loading, a nonlinear time-varying behavior occurs due to the rate and size of straining, temperature, aging, etc. Thermal together with mechanical time-variable loadings are among the main causes of their degradation. Therefore, we designed and built a torsional test rig in the temperature chamber for dynamic experiments on rubber samples. The hyper-viscous-elastic dynamic behavior of hard rubbers was evaluated for different harmonic loads (up to 30% strain). From the strain-stress hysteresis curves and the dependence of dissipation on deformation energy, we proposed a model of hyper-elastic proportional damping of hard rubber coming from the analogy with linear proportional damping.

The methodology of the complex modulus estimation of pre-pressed rubber segments between the disk and the rim of a rubber-damped railway wheel was proposed and applied on the real case. Since, in the area of eigenfrequencies, their dependence to Young modulus is quasilinear, the modulus can be found effectively by the gradient method. The similar behaviour showed itself also for dependence of the modal damping constant on the damping coefficient. The ascertained results of tuned rubber material constants of the railway rubber segments are very valuable for prediction of modal behaviour of the resilient wheels. 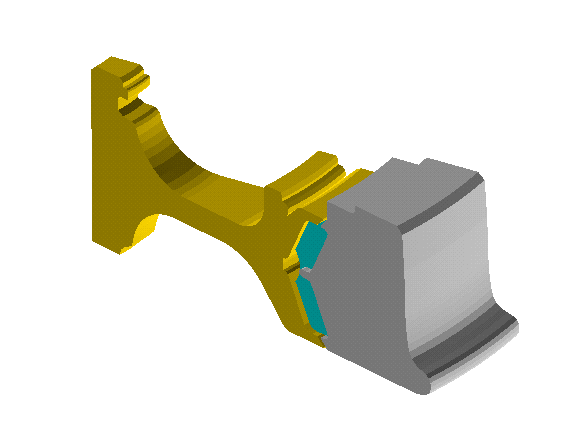 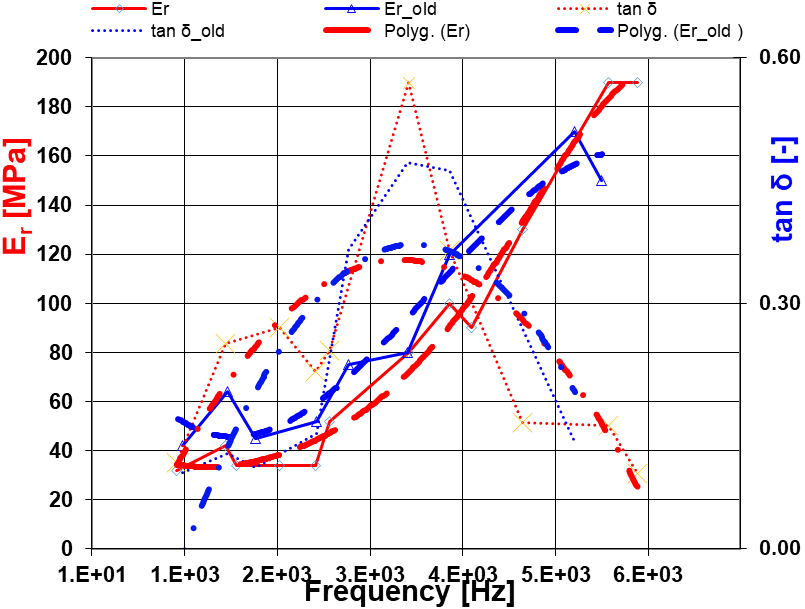 Figure 14: Comparison of frequency dependences of the elastic modulus and loss factor of the old and new mixtures of the rubber.

II) For optimization of monoblock wheels damping by friction rings, a new non-circular shape of the ring was proposed (utility model granted). The new ring design was based on beam model calculations where uniform distribution of contact pressure along the whole circumference of the wheel was prescribed.

The methodology for evaluation of dry-friction effect of damping ring on railway wheel dynamics was proposed. From the frequency transfer functions of MIMO analysis, the split double eigen-frequencies and their corresponding damping ratios were successfully identified. For higher amplitudes of excitation when non-linear behavior of the wheel due to damping ring was more pronounced, the SIMO analysis with sweep excitation was found as the most suitable for evaluation of dry-friction effect of the ring.

The equipment of the Laboratory consists of:

In the frame of research projects of the Laboratory we offer following doctoral thesis topics for doctoral studies on Faculty of Mechanical Engineering of CTU Prague (specialization Mechanics of rigid and deformable bodies and environments):

Dynamics and vibration of rotating bodies with friction and aeroelastic couplings