Although new ways of producing electricity are implemented on an increasing scale, around 93% of electricity in the Czech Republic is still generated in steam and gas turbine power plants (i.e. mainly in nuclear and coal-fired power plants but also in power plants firing different types of gases, biomass, etc.). Even the slightest increase in turbine efficiency brings great savings, not only economically, but also from the environmental perspective. Higher efficiency of energy conversion means using less fuel to produce the same amount of electricity. Especially for power plants burning fossil fuels and various other biological substances this means that we produce less greenhouse gases, fly ash and other pollutants, not to mention air pollution, negative impacts on the landscape and on the whole environment (especially due to coal and gas extraction).

That is why finding new opportunities to increase the efficiency of steam turbines by examining the complex phenomena in the flowing medium makes a lot of sense. The results will find use not only in the production of electricity but also in other applications where compressible media flow through machines or their parts.

Turbomachines are rotary machines in which the energy contained in the flowing medium (water vapor, gases and their mixtures, water, etc.) is converted into rotary motion of the machine. It can also be the other way round – the flowing medium is supplied with energy by the rotary machine. Let’s look at examples from everyday life; the first group is represented by water or wind wheels and turbines, jet engine turbines or the above mentioned steam turbines. The second group includes room fans as well as large compressors for compressing and transporting gases or fans and compressors for aircraft jet engines. 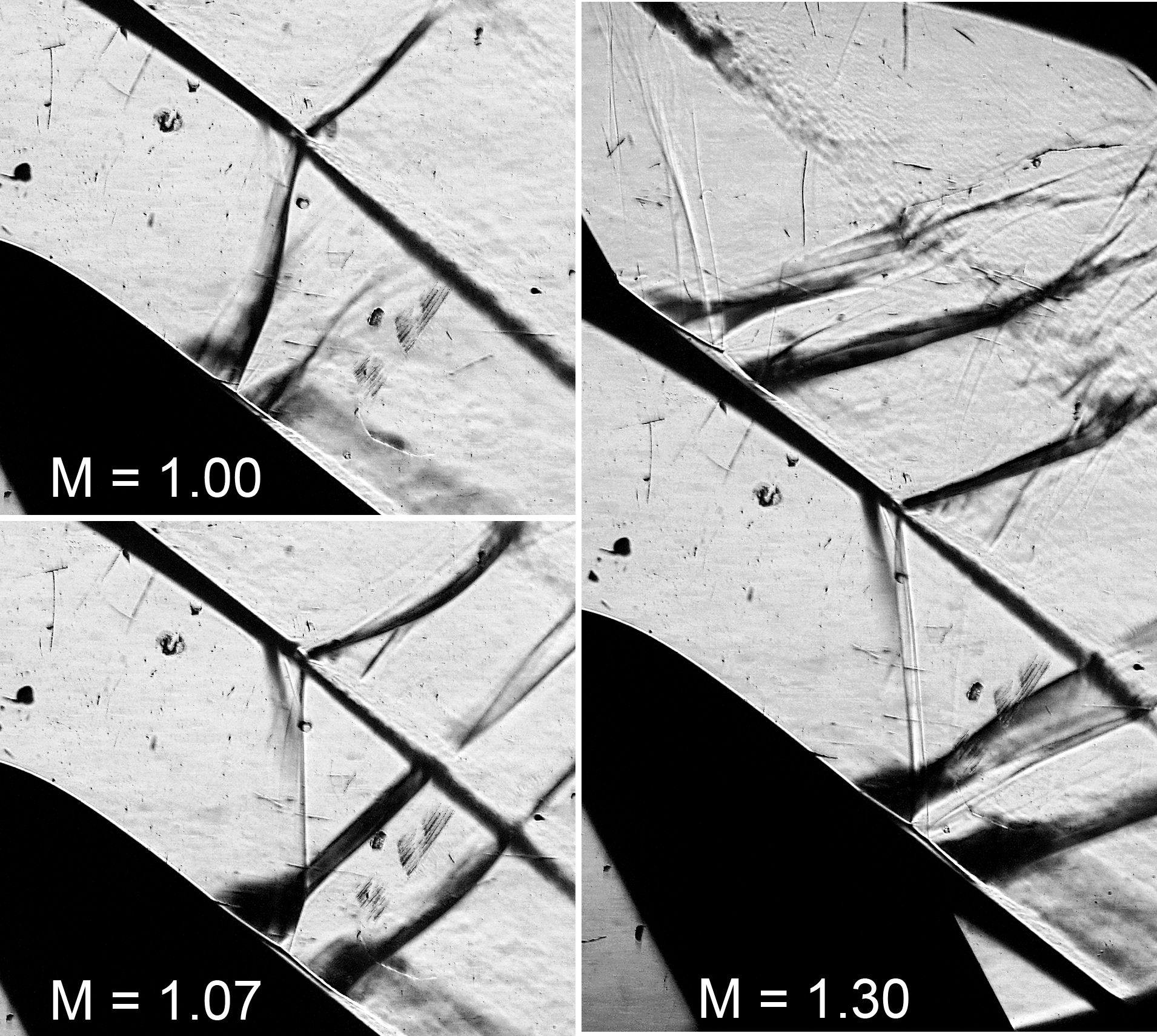 Fig. 1 (left): Schematic of a turbine blade cascade showing the evolution of the system of trailing edge shock waves with changing velocity (Mach number M) of the outlet flow.

Fig. 2 (right): Detailed Schlieren images of the interaction of the trailing edge shock wave with the laminar boundary layer on the suction side of the blade taken at different velocities (Mach number M) of the outlet flow.

In turbomachines operating with compressible media, such as steam or various gas mixtures, under certain circumstances the media moves at very high velocities relative to the blade surface. These velocities reach – and often exceed – the speed of sound. In such a case we are talking about transonic (near the speed of sound) and supersonic (exceeding the speed of sound) flow fields. In such flow fields shock waves are formed on the blades, which significantly affect the efficiency of the turbomachine. Shock waves are flow disturbances in which the pressure, density and temperature of the flowing medium change abruptly. The result is a step change in flow velocity (Mach numbers). In certain circumstances, the flow direction also changes in the shock wave. Such a sudden change of flow parameters causes energy dissipation. This means that some of the energy contained in the flowing expanding medium is converted into energy that cannot be used to spin the rotor of the turbine and is therefore a lost energy.

The Institute of Thermomechanics of the CAS has a unique high-speed wind tunnel in Nový Knín in the Central Bohemian Region, where we can observe and study these shock waves. The research is carried out on so-called model blade cascades, which represent cross-sections of real turbine and compressor blades. In transonic turbine blade cascades, where the flow is accelerated from subsonic (lower than the speed of sound) to supersonic velocities when passing through the cascades, two shock waves are formed past the blade trailing edges. The shock wave generated on the pressure side of the blade impinges on the suction side of the adjacent blade (Fig. 1). Here, the shock wave interacts with the boundary layer, which is a thin layer (with a thickness of several millimeters) of the flowing medium in the immediate vicinity of the blade surface, where the velocity increases from zero (the velocity is generally zero at the surface) to the velocity in the undisturbed flow. If the boundary layer interacting with the shock wave is turbulent (i.e. the flow in the layer is violent, chaotic), the shock wave merely reflects off the surface. However, if the boundary layer is laminar (i.e. the flow in the layer is smooth) before interacting with the shock wave, the flow is locally separated from the blade and two shock waves are formed. The nature of the shock wave/boundary layer interaction depends not only on the character of the boundary layer but also on the parameters of the interacting shock wave. These parameters depend on the Mach number of the flow at the point of interaction and the geometry of the blade cascade (Fig. 2).

This phenomenon has been documented and described in detail at the Institute of Thermomechanics of the CAS (Figs. 1 and 2). But how can be the knowledge from our research used? As ever – to design more efficient turbomachines and improve the computational models used in numerical flow simulations. There are many other phenomena besides the shock wave/boundary layer interaction that can be found in the flow of compressible media. Scientists are studying these phenomena in more detail as the experimental and numerical tools available to them keep improving. Since the 1960s, the Institute of Thermomechanics of the CAS (formerly the Czechoslovak Academy of Sciences) and Doosan Škoda Power (formerly Škoda Plzeň), a manufacturer of steam turbines, have been cooperating on the research of the flow of compressible media through turbine cascades. The cooperation has led to many improvements and designs of better, more efficient and more reliable turbines. For example, over the course of time, the performance of each of the turbines at the Temelín Nuclear Power Plant has increased from 981 MW to 1079 MW, due to the improvements and modernization of the blades – an achievement that has undoubtedly brought enormous economic and environmental savings, considering that the turbines in the other power plants have also been continuously upgraded. After all, the total installed capacity of steam turbines in the Czech Republic is about 15,000 MW!

Back to Featured Articles