By using lasers both for the generation and for the detection of elastic vibrations, the resonant spectra of the examined materials' specimens are obtained in a fully non-contact regime, i.e., not biased by any clamping forces from the ultrasonic probes. Simultaneously, the detecting laser beam scans the surface of the specimen, and thus, not only the resonant frequencies but the shapes of the eigenmodes are obtained.

Numerical solution of the inverse problem of RUS 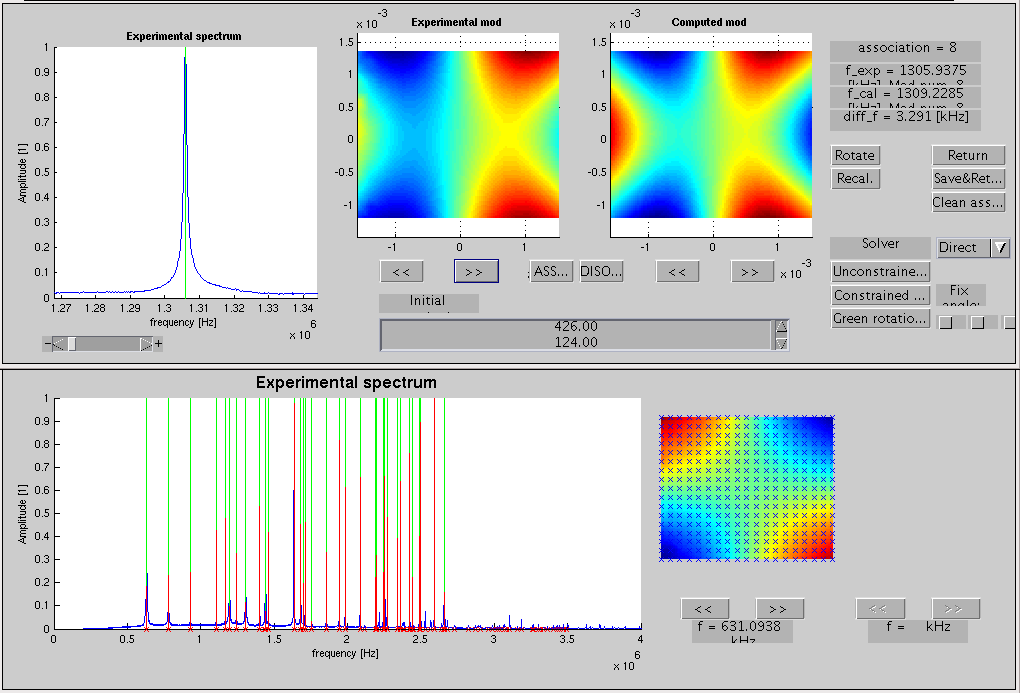 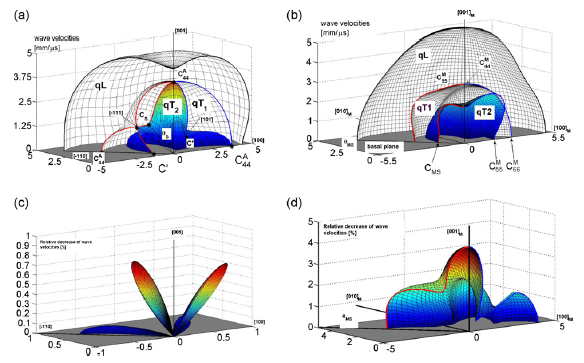 Single crystals of austenite and single variants of martensite of the shape memory alloys (SMAs) are of particular interest. Shear softening in the vicinity of the transition temperatures is investigated by various ultrasonic methods (pulse-echo technique, RUS). For the ferromagnetic SMAs (e.g., Ni-Mn-Ga), the effect of the external magnetic field is analyzed, together with the related magneto-acoustic phenomena (especially damping). 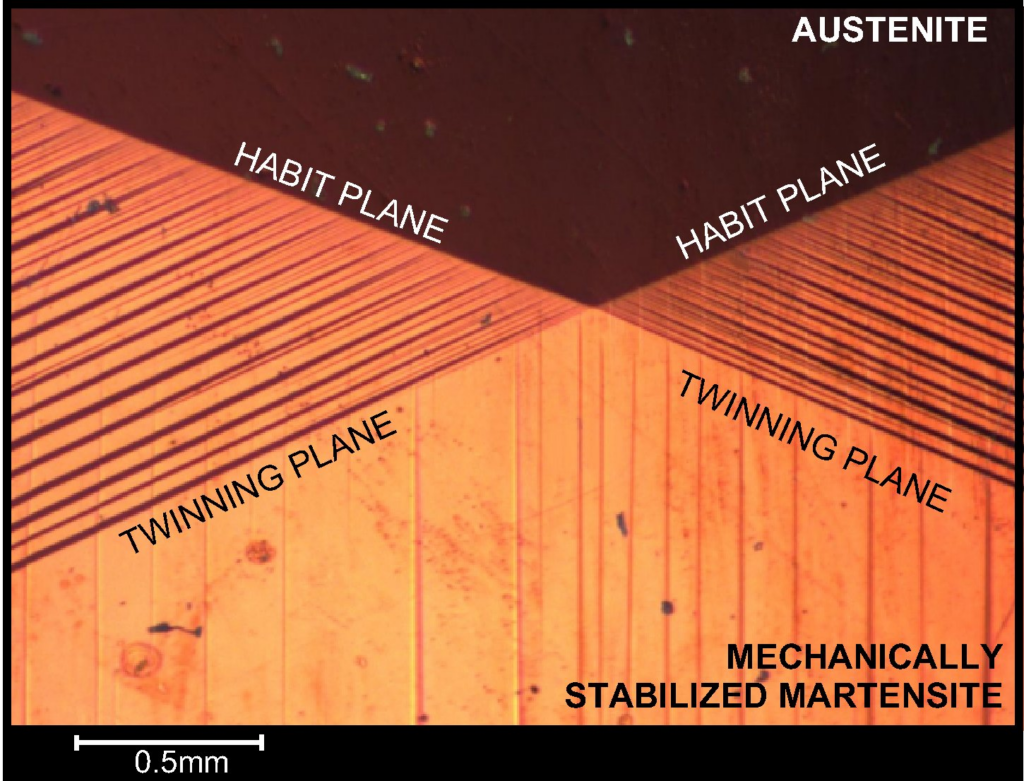 The microstructures of thermoelastic martensites differ, for example, in the twinning system, the volume fractions of the variants, or the orders of the laminate. The averaged elastic properties of martensites with different microstructures might be evaluated using a simple homogenization procedure. Therefore, an inverse calculation of the elastic coefficients of the individual microstructure components is possible if the macroscopic elastic coefficients are known. 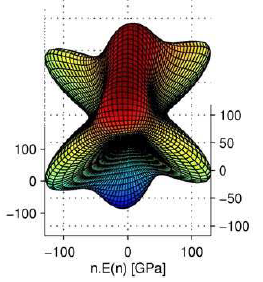 Martensitic microstructures forming between austenite and the mechanically stabilized martensite in the single crystals of SMAs is observed by optical microscopy (2D analysis) and white-light interferometry (3D analysis). The results are compared to the predictions of the mathematical theory of martensitic microstructures. The experiments are done on Cu-Al-Ni single crystals.

Finite element methods are used to analyze the elastic strain fields in interfacial martensitic microstructures, whereto the mesoscopic geometry of the microstructure is taken directly form the optical observations. The results enable the stored elastic energy to be evaluated and, consequently, the thermodynamic stability of individual microstructures to be discussed. 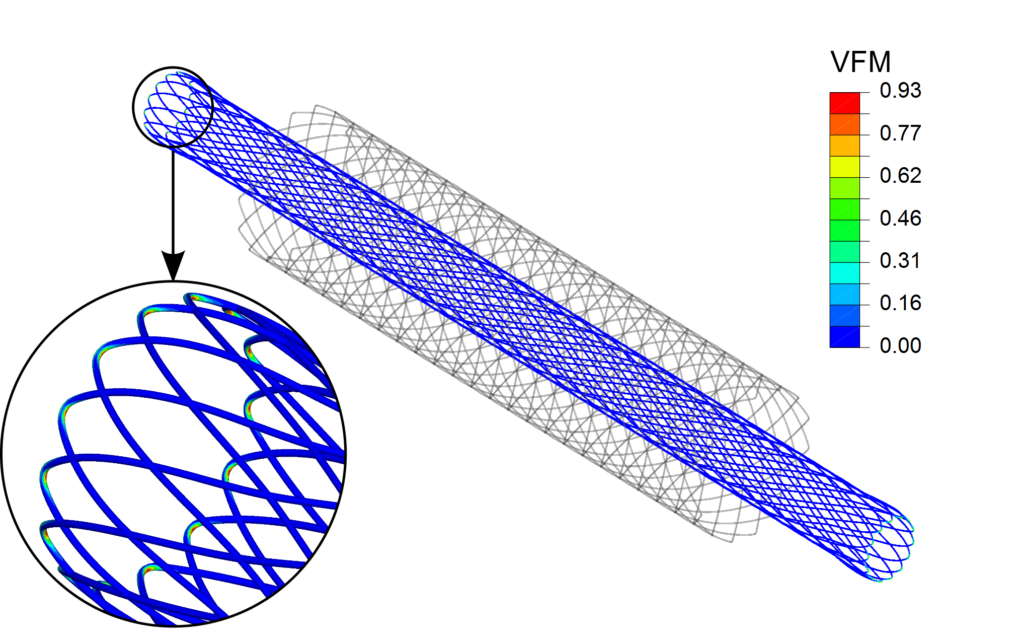 We develop a unified mathematical description (model) of the complex thermomechanical response of the Ni-Ti-based shape memory alloys. It is based on the understanding of related microstructural processes and their thermodynamic nature and is suitable for the algorithmic implementation into computational software (e.g. via the finite element method). The model is motivated by and validated on the experimental data acquired both in our laboratory and in cooperation with other institutes of the Czech Academy of Sciences.

Resonant ultrasound spectroscopy (RUS) is a laser-based experimental technique for contactless determination of elastic properties of materials based on measuring the resonant spectra of free elastic vibrations of millimeter-sized samples. The elastic coefficients are obtained through an inverse procedure, which employs iterative minimization between the measured resonant spectrum and a resonant spectrum calculated from given material parameters of the sample. The internal friction parameter can be obtained from the widths of the resonant peaks.

The elastic vibrations of the samples are generated by a pulsed laser beam focused onto the bottom surface of the measured sample and detected by a laser vibrometer at the top surface. The resonant spectra are typically recorded in a frequency range from 0.1 to 5 MHz. Three separate RUS devices are utilized at the department, differing in the operating temperatures at which the resonant spectra can be detected. 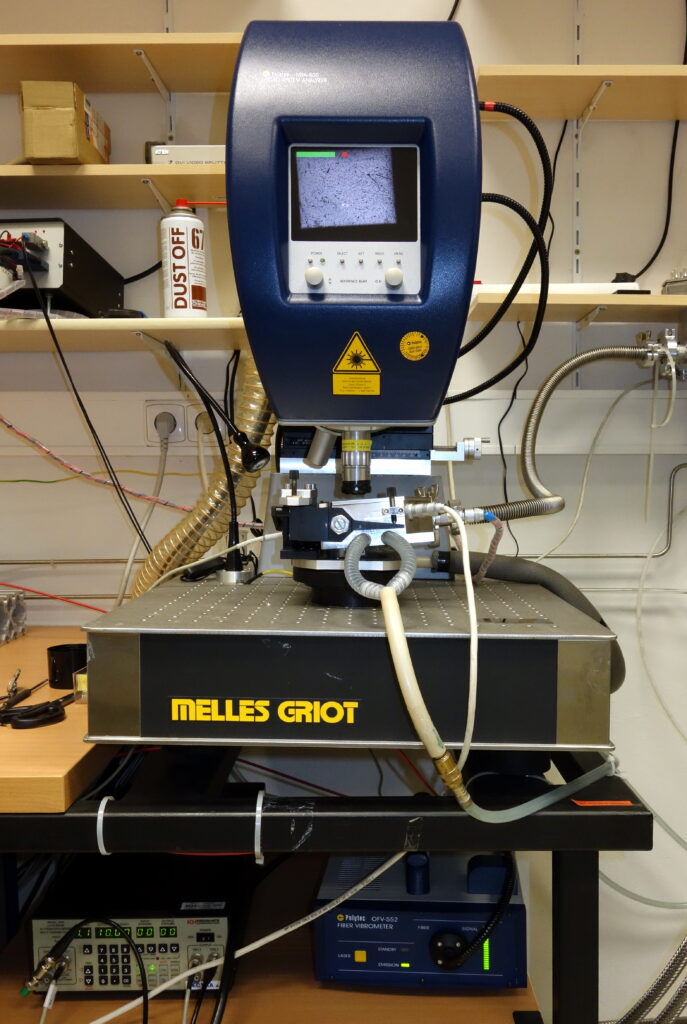 In the first RUS device (Fig. A), the heating/cooling is arranged by a Peltier cell cascade with the operating temperatures between -40 °C and 120 °C. The vibrations are generated by short infrared pulses from Quantel ULTRA Nd:YAG laser. They are detected by a scanning laser vibrometer incorporated in Polytec Micro System Analyzer MSA-600, which allows measuring in hundreds of predefined points. Therefore, the modal shapes of the vibrations are obtained for each resonant frequency. This enables a proper association of several tens or even hundreds of resonant frequencies on the measured and calculated resonant spectra. The resulting elastic coefficients are determined with exceptionally high accuracy. 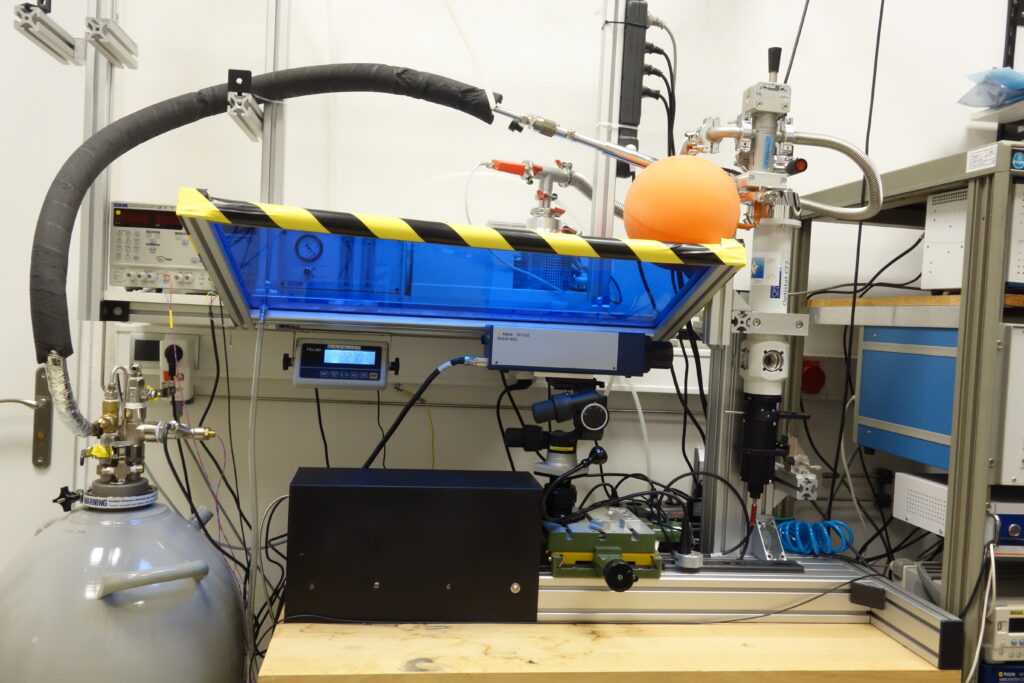